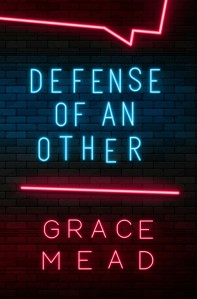 I’m delighted to host today’s stop on the Defense of an Other blog tour, a book I’m really looking forward to reading. I have a guest post to share with you all from Grace herself! Grace has compiled an awesome Top 10 post, I’ve already added them all to my TBR!

Thank you for the opportunity to share my thoughts on ten books addressing trans topics. Ive focused on my impressions and opinions, avoided spoilers, and included memoirs, novels, and nonfiction. Many of these books contain triggers but several are very hopeful:

Nicky Chase, the author of this memoir, is a DJ who played clubs in the Middle East and China, then became a radio host in Hong Kong, and finally moved to New York City to begin presenting authentically. The books breezy, fluid prose bespeaks her background in broadcasting. A journal she kept throughout her transition served as the foundation for the book, so the story feels as if its unfolding in real-time. She’s thoughtful about her hardships, but blunts them with a dry British humor once can easily imagine her using to address the challenges of her transition.

This novel has an intersex protagonist, but, in a world where so many insist that sex and gender are defined by whats between ones legs alone, considering the issues faced by intersex people has been vital to my understanding of what it means to be trans. There’s a graphic rape scene at the beginning of the novel, and while disturbing, its necessary to catalyze changes in the protagonist Max and his family. The sincerity of the author’s voice, the quality of the prose, and the believability of the characters all prevent the novel from descending to the level of soap operas or 1980s daytime talk show television, both of which seem likely candidates to exploit this type of non-fictional or fictional story. Indeed, the book recognizes the problem of sensationalism by building potential exposure by the paparazzi and the characters reactions to it into the plot; it seems to say, of course this is what society chooses to sensationalize; and then challenges it directly as the novel unfolds.

Best line: “Tonight, theres no one here to force myself to feel okay for, to smile or hold it together for, and I feel pretty bad.

Read any book by Elliot Wake with the description on the back cover that most appeals to you, he’s an enormously gifted novelist. This book is painful to read and, 24 hours after finishing it, I felt it made me a better person but also still felt aches and pains for the characters; years later, I feel them anew as I write this review. It begins with a lyrical description of a fatal car crash, continues through to its aftermath, and then explores the ways we’re shaped by those who love but hurt us. Read it, but plan something to lift your spirits after you reach the end, which you’ll likely do the day you start it. This book is excellent even if despite at times being set on the shore its not a beach read.

Best line: This is what happens when you lie. Lies grow thin and steely and hard and become bars. Bars become a cage.”

Being Emily is the first in this two-book series and read it first, but Just Girls is better. Elle, the protagonist in both novels, begins college presenting authentically but stealth, which presents a new set of challenges, including dating. Every issue related to acceptance and discrimination skirted in Being Emily is tackled head-on here, with technical skill and sensitivity.

Best line: Every kind of woman should have a shot at a great life and men too; but she didnt worry as much about them.”

This romantic novel of a girl who transfers to a new high school, presenting authentically while stealth, aims to speak to both trans- and cis-gender people. Though not one of the latter so perhaps not able to judge, I think the author succeeded. I would recommend, unless you’re a trans person in crisis, a 24-hour waiting period before reading the Afterword. It places the novel in a different perspective, and I think you should consider the stand-alone novel before reading it. As trans people, we need stories like this with at least the glimmer of a happy ending. And I suspect the author, a transwoman, knows that.

Best line: My heart screamed that they knew, that the one with those piercing eyes was attracted to me for a moment and his friend was making fun of him for it. That was the kind of scenario that got girls like me killed.”

This book, written by a psychologist about the many different trans clients shes had in her practice, presents a range of trans people, from different backgrounds, and reveals that there is as much diversity within the community as without. Simply written and to the point, it treats trans people as people, whose drive to conform their bodies to their identities is powerful, but understandable. And it is.

Julia Seranos book cuts through the enormous volume of stereotyping and obfuscation surrounding trans issues. As a biologist, she has the education, experience, and the analytic mind to push back on pseudoscience, acknowledge the current limits of the research, recognize where even well-intentioned scientists work is infected with implicit bias, and most importantly identify those who get the science right. On her website, she engages in research done since the book was written and contemporaneous debates. I dont agree with everything shes written, but concepts such as subconcious sex and her generally incisive analysis add great value. A tremendous read for anyone seeking to understand how trans people fit into a larger narrative concerning men and women, which has occupied a more mainstream place in our discourse until now. And continues to do so.

Best Line: Unlike most forms of sadness that Ive experienced, which inevitably ease with time, my gender dissonance only got worse with each passing day. And by the time I made the decision to transition, my gender dissonance had gotten so bad that it completely consumed me; it hurt more than any pain, physical or emotional, that I had ever experienced.”

I read this book the day after its release because Id followed the story of the young Nicole Maines and her New England family in the news for years. After a protracted legal battle sparked by the complaints of a single grandparent, Nicole won the right in the Maine Supreme Court to use a school restroom safely and without stigma. The book skillfully communicates the courage of this young woman, who has since been cast as the first-ever trans superhero on the CWs Supergirl. For women like me at my age to be indebted to what she and others did as children to help pave the way is humbling.

Best line: Even when things were going well, it wasnt about the danger of slipping up so much as the sense of always having to hold back.”

2. Jenny Boylan Shes Not There: A Life in Two Genders (Broadway Books 2004)

Jenny Boylan is an English professor and novelist who transitioned to present authentically full-time and is openly trans. Hers was the first memoir that resonated with mein part because her academic background and career were fundamental to her and she preserved both. When I read it while presenting inauthentically, it was gut-wrenching. In the months before I began to present authentically full-time, I started awake before work at 3 a.m. and re-read it until I sobbed; her isolation when presenting inauthentically cleaved close to the bone; and I so hoped I could also find a path to peace at rest.

Best Passage: And at every moment as I lived my life, I countered this awareness with an exasperated companion thought, namely, Dont be an idiot. Youre not a girl. Get over it. But I never got over it.”

Janet Mocks now-classic memoir combines a delicate touch with searing honesty. The overarching message is positive and hopeful, especially when one considers Mocks history, including bullying, poverty, and sexual abuse, revealed during the course of the narrative in a way that she refuses to allow to define her. Indeed, Mocks resiliency seems to lie in just that knowing when history is powerful as background and informative without dwelling on it or getting mired down in it. This is a book written by a person assigned the wrong gender at birth, but Mock, an excellent stylist, makes it so much more. This is a universal story of even though described in understated ways by Mock herself—personal triumph.

Best Passage: I didnt know how to be truly happy. I had to cope with it by dismissing it, by forecasting its inevitable end. My belief system operated on the notion that the good things in my life were a universal hiccup where doom surely loomed. Happiness was fleeting and accidental; goodness wasnt in the cards for a girl like me.

Grace is a practicing lawyer born and raised in Louisiana who graduated from Dartmouth College and then became the Editor-in-Chief of The University of Chicago Law Review. Her 17-year career has included a one-year clerkship for the appellate court with jurisdiction over Louisiana federal trial courts and 16 years of civil litigation. 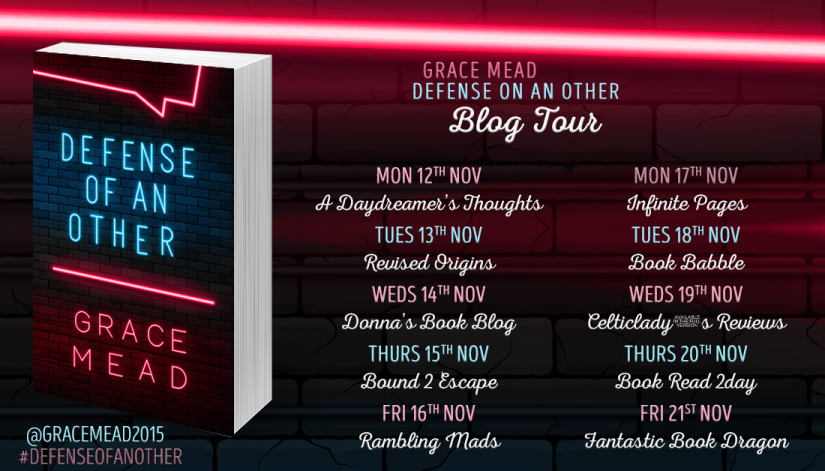 2 thoughts on “Blog Tour: Defense of an Other by Grace Mead”