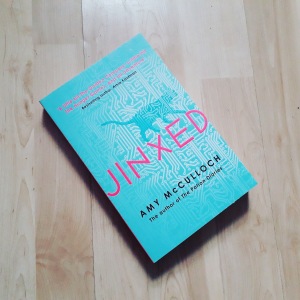 Lacey Chu has big dreams of becoming a companioneer for MONCHA, the largest tech firm in North America and the company behind the  “baku” – a customisable smart pet that functions as a phone but makes the perfect companion too. When Lacey finds out she hasn’t been accepted into Profectus – the elite academy for cutting edge tech – it seems her dreams are over. Worst of all, rather than getting to choose one of the advanced bakus, she’s stuck with a rubbish insect one.

Then, one night, Lacey comes across the remains of an advanced baku. Once it might’ve been in the shape of a cat but it’s now mangled and broken, no sign of electronic life behind its eyes. Days of work later and the baku opens its eyes. Lacey calls him Jinx – and Jinx opens up a world for her that she never even knew existed, including entry to the hallowed halls of Profecus. Slowly but surely, Jinx becomes more than just a baku to Lacey – he becomes her perfect companion. But what is Jinx, really? His abilities far surpass anything written into his code or built into his motherboard. He seems to be more than just a robotic pet. He seems … real.

I haven’t read any of Amy’s previous books, when this one dropped in my inbox I was intrigued by the concept and replied immediately replied to request a proof. All I can say is, Jinxed is amazing! I love this book so much. I started it on a tube journey and kept missing my stop, a rare occurrence when I’m at the beginning of a book. It just gets better from there, it’s gripping, intense and One of the most captivating books I’ve read in a long time. We need more books with women in the STEM field. I haven’t read many and I lapped it up.

Set in a world where a smartphone is no longer just a smartphone. People now have Bakus, they come in a variety of animal models and are companions as well as your smartphone. Lacey has dreamt of attending Profectus, the prestigious school owned by Moncha Corp and forging a career as a companioneer for as long as she can remember. After the rejection email Lacey finds a damaged Baku in a ravine while retrieving her friends Baku and takes it home and starts repairing it things take a bizarre turn as a new email accepting her arrives. She works hard over the course of the summer holiday to finish the repairs before starting at Profectus. She soon realises Jinx is not like other Baku, he’s exhibiting signs of emotion and free will. As time passes at Profectus, Lacey begins to uncover the truth about Moncha Corp and the absence of the company’s creator.

Jinx is such a brilliant character, I love his sassy and sarcastic personality, his mischievous side that gets Lacey into many a tight spot and trouble. But more than anything, I love the bond between him and Lacey. There’s something really special about it, and not in the obvious way. The plot and character development is brilliantly written, and kept me glued to the book until I had finished it. How new and old friendships evolved throughout the book was fascinating to read, especially between Lacey and Zora as it’s the first time they’re not with each other every day. That cliffhanger at the end left me me the worst book hangover ever. I’m already desperate to get my hands on the sequel, I need to know what happens next.