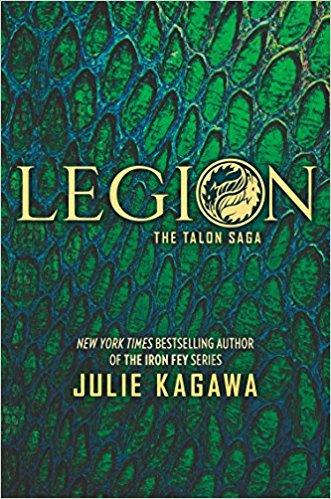 The legions are about to be unleashed, and no human, rogue dragon or former dragon slayer can stand against the coming horde. Book 4 of 5 in The Talon Saga from New York Times bestselling author Julie Kagawa.

Dragon hatchling Ember Hill was never prepared to find love at all–dragons do not suffer human emotions–let alone the love of a human and a former dragonslayer, at that. With ex-soldier Garret dying at her feet after sacrificing his freedom and his life to expose the deepest of betrayals, Ember knows only that nothing she was taught by dragon organization Talon is true. About humans, about rogue dragons, about herself and what she’s capable of doing and feeling.

In the face of great loss, Ember vows to stand with rogue dragon Riley against the dragon-slaying Order of St. George and her own twin brother Dante–the heir apparent to all of Talon, and the boy who will soon unleash the greatest threat and terror dragonkind has ever known.

Talon is poised to take over the world, and the abominations they have created will soon take to the skies, darkening the world with the promise of blood and death to those who refuse to yield.

I received an E-ARC from Mira Ink in exchange for an honest review.

Warning! – My review contains spoilers from previous books in this series.

Legion is the explosive third instalment in the Talon Saga.
I’m going to keep this review short as I don’t want to spoil anything for you guys who haven’t read it yet. The cover (as usual,) is gorgeous, I love the simple elegance of the dragon scales and always look forward to seeing what colour will be next.

Just when you didn’t think the Talon Saga could get any better, Julie Kagawa returns with Legion. It starts off where Soldier ended. Garrett, ex St. George soldier, has just been shot by the Patriarch of St. George after winning the duel, exposing the Patriarch’s betrayal, simultaneously throwing the Order into chaos and playing right into Talon’s hands. For the first time the Rogues and St George have a common enemy… Talon. Ember, Riley and Wes are lying low while they wait to see if Garrett recovers. Riley gave his blood to save Garrett, though any possible effects are unknown as a dragon/human blood transfusions have never been attempted before. A town destroyed in a plane crash leaves them suspicious, after seeing a Talon agent on the news. What they find when they go to investigate is far more sinister than anyone thought.

Meanwhile, Dante, Ember’s twin is rapidly working his way up the ladder at Talon. There are more chapters from Dante’s pov which I liked. It was interesting to see things from his perspective and how his childhood influences his actions within the organization today. We find out why Ember is so important to Talon after she is forced to return and finally meet Talon founder, the Elder Wyrm! I won’t say more because of spoilers.

Legion is darker than the first three instalments and is set at a much faster pace, it’s non-stop from the start. I’m not the biggest fan of love triangles so the whole Ember/Riley/Garrett triangle being resolved was a relief, even though I didn’t get what I wanted. Ember’s character development is brilliantly crafted, her chapters were my favourite to read. She’s standing tall and demanding to be heard and listened to. Ember is such a badass, Riley is still a firm favourite though!

Legion is definitely my favourite so far, I’m already impatiently awaiting book 4. I can’t wait to see what’s in store for the rogues, Order and Talon. I’m also curious about Dante, I have a feeling he might surprise us. I highly recommend this series, Legion gets a solid five stars from me.

The Talon Saga: Legion is published by Mira Ink May 4 2017

Have you read Legion, what did you think? Let me know in the comments!